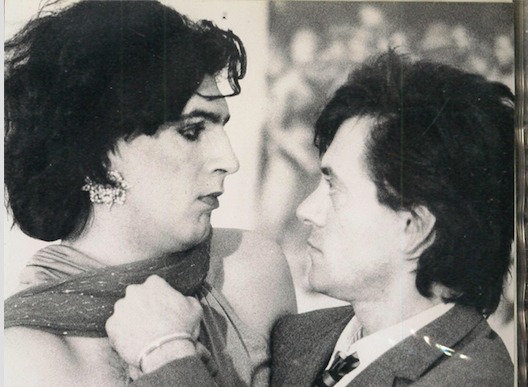 In 1979 the Italian theatre discovers a young Bolognese actor who meets the approval of the public and the critics for his role of an old diva of the variety, in a monologue by Carlo Terron: Senza trucco tutta in nero. Those were the years of the advance of the analytic-existential theater, when emerged also the archipelago of the Third Theater, and when the new technological theatre wave was discovered. Almost detached from this picture, Erio Masina decided to stage a monologue from the Fifties and proposed an all but know “serious” version of the en travesti performance. Along the years, Masina developed a personal approach to the female impersonation in dramatic theatre, without parodistic elements. He produced and directed six shows and became famous for his female characters, grotesque, intense and dramatic at the same time. In the meanwhile, he took part in L’opera buffa del giovedì santo di Roberto De Simone, and played a leading role in Pièce noire by Enzo Moscato. His career runs aside the LGBT Theatre even if Masina didn’t share the same political commitment. Nevertheless, his influential performance has crossed the birth of the New Neapolitan Drama, leaving traces in the work of Annibale Ruccello and Enzo Moscato. It was an unusual career, soon interrupted for a sudden retreat in 1988, with almost no matches among its contemporaries.